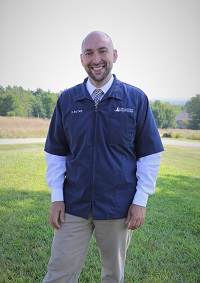 Dr. Wes Chapin is a member of the Society for Theriogenology. He has received training from the International Canine Semen Bank (ICSB) on freezing semen and Epididymal Harvesting. Dr. Chapin also brings extensive surgical and management experience to our team.

Dr. Chapin grew up on his family’s farm in upstate New York. As a young man he was very active in 4-H and worked with sheep and various livestock. He also enjoyed working at a local veterinary hospital. Both his upbringing and background in animal care made veterinary medicine a very natural career path for him.

He first began his veterinary career in a mixed animal practice, but found he wanted to focus more on small animal medicine and surgery. Dr. Chapin moved to the northeast and joined the Broadview Animal Hospital team in 2005. He then became an owner of the practice in 2008.

Although Dr. Chapin enjoys all aspects of veterinary medicine, he is most passionate about soft tissue and orthopedic surgery. He has pursued continuing education to further his skills by attending the Ohio State Fracture Management course, and has also undergone training to perform Tibial Tuberosity Advancement (TTA) surgery to manage anterior cruciate ligament (ACL) injuries in dogs. Although not board certified, Dr. Chapin also manages broken bones, luxating patella (knee cap) disease, and femoral head and neck ostectomies (FHO surgery). He says, “I truly love seeing my patients heal and get back to being active and happy after an injury. I want to be sure everything goes smoothly with my patients throughout the recovery process. I feel a duty to help my clients maintain peace of mind through health challenges.”

Dr. Chapin says that he enjoys practicing veterinary medicine because he has “always had a deep desire to help heal animals when they are sick or hurt. I also thoroughly enjoy getting to know my patients. They each have their own personality.”

Interestingly enough, Dr. Chapin met his wife, Hilary, during their time together in 4-H as teenagers. They have two young children. Dr. Chapin loves to travel with his family and also enjoys building, skiing and fly fishing.

The Chapin family has a plethora of pets. They have four cats named Lilo, Princess Kiss, Camella, and Flowery. (As you can tell, the kids have taken an active role in naming the pets.) They also own five dogs: a Corgi named Gabby, a Cocker Spaniel named Willy, a Labrador Retriever named Rosie, and two Great Pyrenees that are livestock guardian dogs, named Rita and Chunk. They watch over the forty Romney sheep that also reside at the Chapin home, which is aptly named “Smiling Sheep Farm”. The family takes pride in showing the sheep nationally and selling their beautiful fleeces.

Font Resize
Contrast
Accessibility by WAH
Call Us Text Us